How does sedimentary environments effects on rock geomechanical behaviours?

Sedimentary environments are important for investigating rock physical, geological, and geomechanical behaviours. Different from other mineral resources, coal-bearing formations mainly formed in different ancient coal accumulation environments. Its characters are controlled by the ancient geologic environment and its transition when the peat was piled up. Because of different sedimentary environments and sedimentary features, the thicknesses of the coal seam roof and floor formed under different environments changes greatly in both vertical and lateral directions. These lead to heterogeneity and discontinuity of coal-bearing formations. During mining process of the coal seams, roof stability becomes worse in these weak formations. Roof caving, bottom heaving, and rock burst accidents often occur in the transition zone between the sandstone and mudstone of the roof. During mine development and production, in order to meet the requirements of transportation and ventilation, a safe, stable, and complete shaft and tunnel network system need to be established. However, because the lithologies of the shaft and tunnel change significantly in the lateral direction, soft or weak formations can be encountered. In this case, shaft and tunnel construction and maintenance become difficult. In the past, mine designers often considered that the rocks distribute constantly in both thickness and lithology in the lateral direction. This design was not always true and led to the failure of the original design. Therefore, it is necessary to study rock sedimentary environments, to understand rock lithology distribution in the studied area, and to make the appropriate design according to geological conditions. Formations making up the Earth's crust are described by the term, facies. Sedimentary facies is the most interested facies with regard to fluid flow. Broadly divided into sandy facies, shaly facies, and carbonate facies, sedimentary facies is related to the environment in which their sediments are deposited. In general, sedimentary environments include alluvial fan sediments, fluvial deposits, delta deposits, lake deposits, barrier island deposits, and lagoon deposits.

Alluvial fan sediments
Alluvial fan sediments are deposits of sediments in regions of high relief, generally where streams issue from mountains onto a level plain. The fan starts at the apex, the source of sediments from regions of higher relief. Sediment transport from the apex tends to follow the steepest slope downward, and the sediments, therefore, spread out in a fan. The largest boulders or pebbles are deposited near the apex. Downslope, the fan channel splits up into a number of smaller channels. This reduces the velocity of the water flow, and capacity for carrying sediment is lowered. Therefore, sediments become finer-grained down-slope, even if there is no reduction in steepness of the slope. Further downslope it becomes braided streams and lake deposit. In front of the apex the large faulting sedimentary basin usually are formed. This phenomenon is quite common in the Mesozoic coal-bearing strata in the eastern China.
Near the apex the sediments are primarily consisted of conglomerates, and their main components are coarse gravels and boulders. The gravels are filled with clay, silt, and sand. The conglomerate layer distributes in strips and is parallel to the direction of the water flow. Downslope to the middle fan, the sedimentary rocks are mainly comprised of sandstone with some gravels. In the fan tail the sediments are much finer. The sedimentary rocks are consisted of sandstones, siltstones, claystones, and coal seams.
The main geomechanical features of the alluvial fan sediments are as follows: 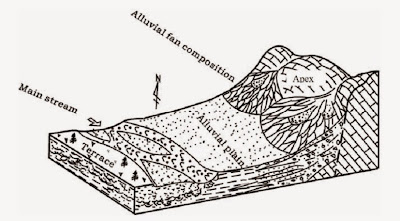 River sediments
Fluvial deposits are sediments deposited as the result of rivers. Fluvial sediments include deposits of braided streams, meandering rivers, and anastomosing streams. Braided streams have branched channels because the river channel is not very stable. This usually occurs with steeper stream gradients and an abundant supply of sediments. Braided streams favour the deposition of coarse sediments containing coarse sand and gravel with little clay and silt. Meandering rivers move in loops, with the greatest velocity at the outer bank where erosion occurs and lower velocity at the inner bank where deposition occurs. The fining upward sequence from sand to silt to clay is typical of meandering river facies. This sequence is the result of the water velocity decreasing as the river, over a given spot, migrates from the outer bank to the inner bank. If the spot is no longer in the river but in the flood plain, then only clay and silt from nearly stagnant water are deposited. An anastomosing stream is defined as a branching, interlacing stream having a net like appearance. Along the U.S. Gulf Coast is a typical example of bayous and slough in regions of very low stream gradient and with subsidence. Meandering river sediments vary from coarse to fine grains upwards. During the basin deposit process, thick sediments may form due to the continuous development of the meandering rivers. In the meandering river sedimentary system, channel sands act as the skeleton in the rock mass. Generally, it forms laterally many strips of sandstones surrounded by the flood basin deposits. In the lateral direction some layers in the strata were thickened, thinned, or even disappeared. Vertically, the sandstones array or overlap each other in lens shape, and lithology varied cyclically. Therefore, in the meandering river deposit system, fine-grained sediments always surround sand sediments. These made rock mechanical properties anisotropic and heterogeneous.
The rocks in fluvial deposits are sandstone, siltstones, shales, mudstones, and claystones and have the following geomechanical behaviours: 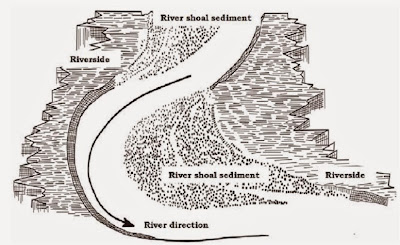 Delta sediments
Deltas form where rivers carrying a large supply of sediments empty into a sea coast where the sediments cannot be transported away as fast as it is deposited. Thus, deltas lie in the transit region between the fluvial and marine environments. The Mississippi River Delta is a good example.
The rocks in delta deposits have the following geomechanical behaviours:

Lake sediments
Lake sediments are deposited in a lake accumulated on the lake shore and on lake floor. They are deposited in a terrestrial environment and contain organic and inorganic particles, microfossils such as pollen and algae, and macro fossils such as leaves and seeds. Deposit speed in lake environment is faster than that in marine environment, because of a smaller wave in the lake. Lake shore deposits are generally well-sorted sands. The sediments load of a stream entering a lake will be dropped as the stream’s velocity and transporting ability suddenly decrease. The resulting deposit, which extends outward into the lake, is a delta. Inclined, generally well-sorted layers on the front of a delta pass downward and outward into thinner, finer, evenly laminated layers on the lake floor. Most lake sediments are layered, in which the layers/strata are defined by colour variations. In the deeper parts of the lake, the sedimentary layers are very thin, and deeper-water sediments are fine-grained while those in shallow water are coarse.
The strata in lake deposits have the following geomechanical behaviours:

Barrier island sediments
Barrier islands or spits are long, narrow, offshore deposits of sand or sediments that parallel the coast line. The islands are separated from the main land by a shallow sound, bay or lagoon. Barrier islands are often found in chains along the coast line and are separated from each other by narrow tidal inlets. The rising waters carried sediments from those beach ridges and deposited them along shallow areas just off the new coast lines. Waves and currents continued to bring in sediments that built up, forming the barrier islands. In addition, rivers washed sediments from the mainland that settled behind the islands and helped build them up. The sediments of barrier islands are well-sorted, generally medium to fine grained sandstones with silicate cementation. These sandstones have very high strength. Some strata of barrier island sediments can extend for 160 km or more. They are very hard strata. If a coal seam roof is this kind of strata for long wall caving mining, it is very easy to form a large area of un-caving strata; therefore it is likely to have rock burst.
Lagoon and tidal lagoon sediments
Lagoon, tidal lagoon, and barrier islands or spits are sedimentary elements that parallel to the coast line. Lagoon environment belongs to a shallow basin that are separated from the ocean by barrier islands or barrier spits and jointed with the ocean through tidal inlets. In the places where tide develops, a lagoon is a shallow depression full of water even in the period of low tide. If there is sufficient sediment supply, a coastal lagoon can gradually develop into a tidal lagoon or swamp. Therefore, lagoon deposit is closely associated with tidal lagoon and swamp deposits. They transit vertically and are contiguous horizontally.  Lagoon sediments generally are laminated fine-grained sediments, such as clay and silt. In humid and semi-humid regions where coal measures form, these fine sediments often are rich in organic substances. Tidal lagoon is a wide and flat region around the lagoon and depends on the difference of the low and high tides and the ground slope. Near low tide line in the intertidal zone, due to the strong hydraulic activity, flat sand deposits can be formed and developed to be large slaty or sphenoid cross-beddings. Near high tide line, the sediments are mostly mud and silt with horizontal lamination and current lamination.   Sediments from the lagoon are uniform in mineralogical and mechanical composition. The geomechanical features of the sediments in this sedimentary mode are as follows: 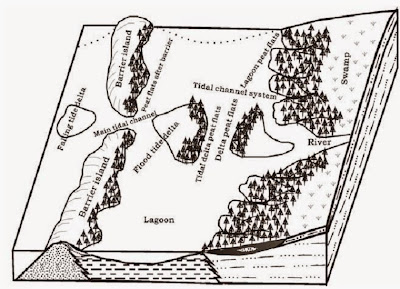