How do mountains build?

Plate moves around the Earth's surface which exerts powerful lateral forces on rocks. The response of the crust to those forces gives rise to deformation on a large scale, particularly along plate boundaries. For example, dozens or hundreds of large-scale faults can form in zones of plate convergence, resulting in a broad and high mountain belt. The geologic processes that can result in mountain building.

Geometrically, if two plates are colliding, they can respond as follows:
Let's consider the first two cases.
Suppose an oceanic plate converges with a continental plate. The oceanic plate, being more dense, subducts into the mantle. If all convergence (100%) is accommodated by subduction, the overlying continent will remain undeformed and should undergo no net uplift (although topography will undoubtedly develop as arc volcanoes appear). Suppose that not all convergence is accommodated by subduction and a few percent of the convergence instead causes the upper plate to shorten. How much uplift is implied? 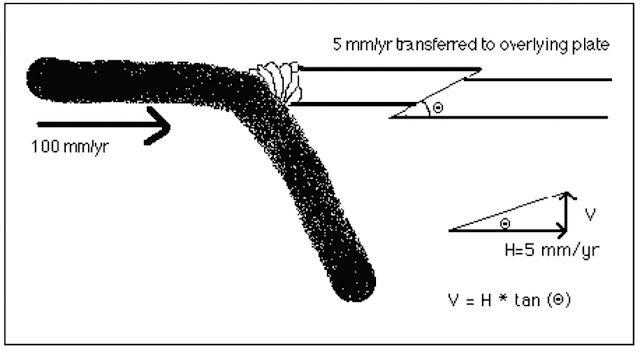 Geometrically, the 5 mm/yr of horizontal shortening translates into vertical motion as shown above, with the only dependence being on the dip of the fault along which the continent is shortening. For low angle faults (10 degrees), uplift will occur at rates of about 1 mm/yr (1 kilometre per million years). Over 5 million years, this amounts to uplift of 5 kilometres or 3 miles (15,900 feet). Over the same period, the two plates will have converged some 5 million years x 100 kilometres per million years or 500 km. The total uplift then is only a small percentage, 1%, of the total horizontal motion.

Continent-continent collisions are not usually accompanied by subduction because both plates are too buoyant to be thrust deeply into the mantle. The amount of crustal thickening and uplift in such a collision can thus be much greater than for an ocean-continent collision. For example, over the past 40 million years, continental India has driven northward into continental Eurasia across the Himalayas mountain belt at a rate of about 40-50 millimetres per year. If you work it out, this implies that the two plates have somehow shortened by more than 1500 kilometres (about 900 miles) across the Himalayas. Since subduction is not occurring, the shortening has been accommodated by mountain building and lateral escape.

Plate convergence of hundreds or even a thousand kilometres or more over millions of years might be accompanied by only several kilometres of uplift. This uplift, while spectacular to the eye, is merely a small part of the displacement "budget", which is largely dominated by horizontal motion.

Why is this the case?. It is because of the following: