Sedimentary basins are classified by tectonic (and, specifically, plate-tectonic) setting. That's fairly easy to do for modern basins, but it's rather difficult to do for ancient basins. List of some of the important criteria that could be used, ranging from more descriptive at the top of the list to more genetic at the bottom of the list:

Location and tectonic setting: in anorogenic areas on cratons.
Tectonic and sedimentary processes: These basins have no apparent connection with plate tectonics. They are thought to reflect very slow thermal subsidence (for times of the order of a hundred million years) after a heating event under the continental lithosphere. But the reasons for depression below the original crustal level are not understood. Erosion during the thermal uplift seems untenable, as does lithospheric stretching. Subsidence is so slow that there seems to have been no depression of the upper surface of the lithosphere, so depositional environments are mostly the same as those in surrounding areas; the succession is just thicker. These successions are also more complete, however, there are fewer and smaller diastems (A diastem is a brief interruption in sedimentation, with little or no erosion before sedimentation resumes), so at times the basin must have remained under water while surrounding areas were emergent.

Location and tectonic setting: extending from the margins toward the interiors of cratons.

Tectonic and sedimentary processes: Aulacogens are thought to represent the third, failed arm of a three-armed rift, two of whose arms continued to open to form an ocean basin. In modern settings, aulacogens end at the passive continental margin. An example is the Benue Trough, underlying the Congo River Basin in West Africa. The ocean eventually closes to form an orogenic belt, so in ancient settings aulacogens end at an orogenic belt; an example is the basin filled by the Pahrump Group (Proterozoic) in Nevada and California. 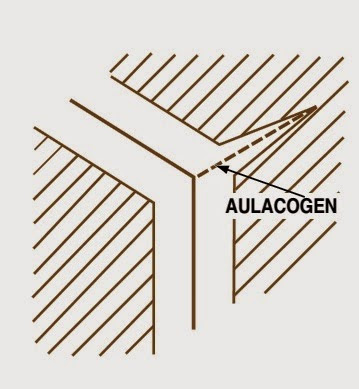 Location and tectonic setting: Within continental lithosphere on cratons.

Tectonic and sedimentary processes: Lithospheric extension on a craton, presumably by regional sub-lithospheric heating, causes major rifts. Some such rifts continue to open and eventually become ocean basins floored by oceanic rather than continental crust; the basin description here then applies to this earliest stage of the rifting. In other cases, the rifts fail to open fully into ocean basins (perhaps some adjacent and parallel rift becomes the master rift), so they remain floored by thinned continental crust rather than new oceanic crust. A modern example: the East African rift valleys. An ancient example: the Triassic–Jurassic Connecticut and Newark basins in eastern North America. Sediment supply from the adjacent highlands of the uplifted fault blocks is usually abundant, although in the East African rifts the land slope is away from the rim of the highlands, and surprisingly little sediment reaches the rift basins. 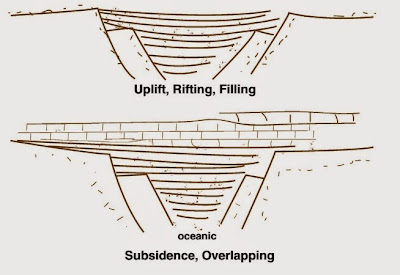 Location and tectonic setting: In a narrow and newly opening ocean.

Processes: This category of basins is transitional between intracontinental rift basins and passive-margin basins. Basins have opened wide enough to begin to be floored with oceanic crust but are still so narrow that the environment is either still non-marine or, if marine, has restricted circulation. Modern examples are the Red Sea and the Gulf of Aden. In the ancient, the sediment fill of such a basin is likely to underlie passive-margin sediments deposited later in the history of ocean opening.

Size, shape: long, narrow; straight or piecewise straight; tens to a few hundreds of kilometres wide, up to a few thousand kilometres long. 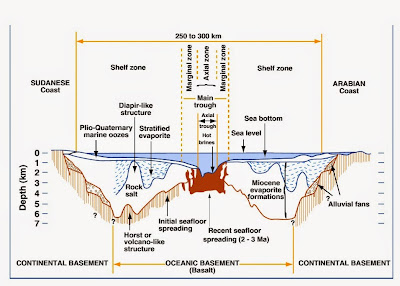 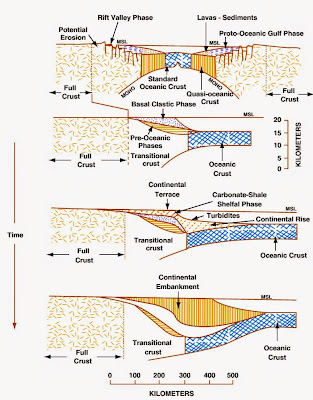 Location and tectonic setting: Along passive continental margins, approximately over the transition from continental to oceanic crust formed by rifting and opening of a full-scale ocean basin

Processes: As an ocean basin opens by spreading, the zone of heating and extensional thinning of continental crust on either side of the ocean basin subsides slowly by cooling. Sediments, either siliciclastics derived from land or carbonates generated in place, cover this subsiding transition from continental crust to oceanic crust with a wedge of sediment to build what we see today as the continental shelf and slope. In the context of the ancient, this represents the miogeocline. The subsidence is accentuated by loading of the deposited sediments, resulting in a prominent down bowing of the continental margin. Deposition itself therefore does not take place in a basinal geometry, but the base of the deposit is distinctively concave upward.

Sediment fill: Overlying and overlapping the earlier deposits laid down earlier during rifting and initial opening are extensive shallow-marine siliciclastics and carbonates of the continental shelf, thickening seaward. These sediments pass gradually or abruptly into deeper marine fine sediments of the continental slope and rise, often grading or inter-fingering seaward into deep marine coarse and fine siliciclastics or re-sedimented carbonates in the form of turbidites building submarine fans at the base of the slope and filling the deepest parts of the ocean basin to form abyssal plains. 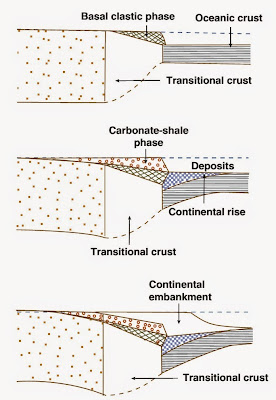 Location and tectonic setting: In the abyssal ocean, at the line of initial down bending of the subducted oceanic-crust plate in a subduction zone.

Tectonic and sedimentary processes: (1) Open-ocean pelagic sediments (mainly abyssal brown clay and organic oozes) are conveyor-belted to the trench, and underlie the sediments, thin to thick, deposited in the trench itself. (2) What happens to the sediments delivered to or deposited in the trench? While still within the trench they are little deformed, but they don't stay that way long. They are either scraped off the descending plate to form an accretionary wedge, whose structure ranges from chaotically mixed material in a subduction mélange to a fairly regular imbricated succession of under-thrusted sheets dipping toward the arc (the thrust sheets themselves get younger downward, but within a given plate the sediments get younger upward), or they are dragged down the subduction zone.
Size, shape: long and narrow (tens of kilometres wide, thousands of kilometres long), arcuate, with convex side toward the oncoming subducted plate. 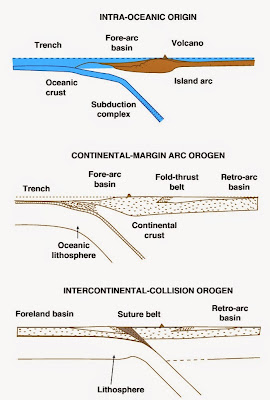 Location and tectonic setting: On the inner (arcward) wall of subduction-zone trenches.

Tectonic and sedimentary processes: The basins are formed as low areas, with closed contours, between adjacent thrust sheets in the growing accretionary wedge. Near-surface folding of sediment in the accretionary wedge may also be a factor in the development of the basins. These basins intercept some of the sediment carried as turbidity currents from upraised older parts of the accretionary complex, or from the more distant arc itself.

Sediment fill: deep-marine silts and muds sedimented directly into the basins or slumped into the basins from higher on the slope; also coarser siliciclastics supplied from farther upslope by turbidity currents. 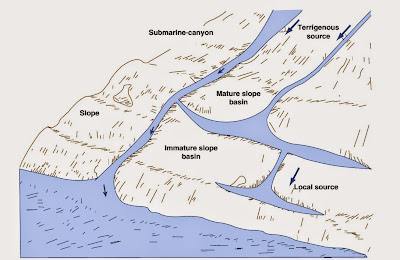 Processes: As subduction proceeds, a relatively low area, usually below sea level, is formed between the relatively high outer arc upraised by subduction and the inner volcanic arc built by subduction magmatism. Ancient examples of such fore-arc basins are likely to be tectonically isolated from the originally adjacent areas. After an arc-continent collision, another variant of fore-arc basin can be formed between the outer arc and the overriding continent. These basins are likely to be filled mainly from the high land of the tectonically active continent. Later continent-continent collision would make direct reconstruction of their tectonic setting difficult.

Size, shape: tens to a few hundreds of kilometres wide, hundreds to thousands of kilometres long; often with varying development along their length; commonly arcuate or piecewise arcuate, reflecting the geometry of subduction.

Sediment fill: Coarse, fluvial, siliciclastics, mainly as alluvial fans, thinning and fining away from the arc or suture, often passing into shallow-marine sandstone-shale successions if sea level is high enough to flood the basin. Thickness are up to many thousands of meters. The classic molasse facies, thick non-marine conglomerates, is deposited in foreland basins. 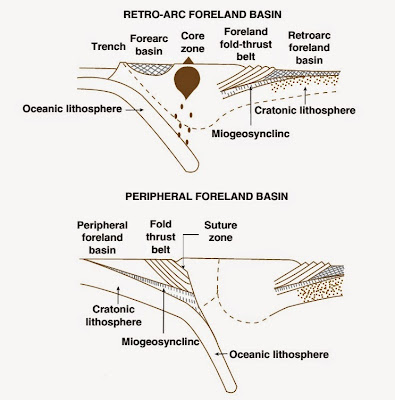 Processes: Continental margins and subduction zones are (for different reasons, connected with geometry of rifting and geometry of subduction) commonly irregular in plan rather than straight, so when continent-continent collision eventually comes to pass, certain salient of continental crust encounter the subduction zone before re-entrants. With further subduction and suturing, this creates isolated basins still floored by residual oceanic crust, which receive abundant sediment from adjacent strongly uplifted crust.

Size, shape: many tens to hundreds of kilometres across; irregular in shape.

Sediment fill: very thick and highly varied, with strong lateral facies changes; usually fluvial at the margins, commonly passing into deep-marine sediment gravity-flow deposits; sometimes the basin becomes sealed off from the ocean, so that facies include lacustrine sediments. 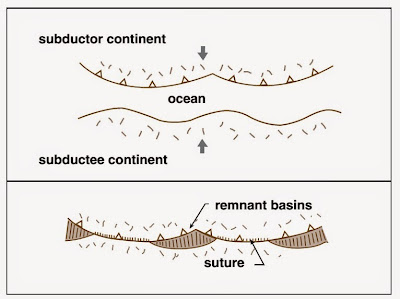 Location and tectonic setting: Locally along major strike-slip or transform faults, either in continental crust or in oceanic crust.

Sediment fill: The continental crust basins, which are the most significant sedimentologically, are filled by thick non-marine to marine coarse to fine clastics, often as alluvial fans passing into lake deposits or into deposits of restricted marine environments. In some cases thick marine turbidites fill the distal parts of the basin. There is usually sharp variation in facies laterally, and the thickness of the lithologic units may be not much greater than the lateral extent, or even less. Deposition is concurrent with elongation of the basin, so be wary of total section thickness computed by bed-by-bed measurements of the section. 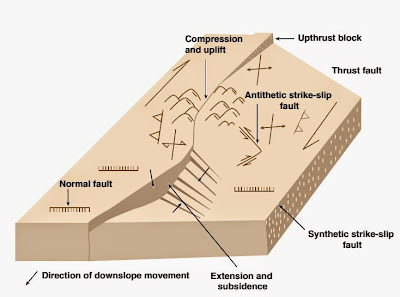