Sources and receivers in seismic aquisition

Update at Monday, 15 June 2015
It is essential at this point to understand the principle of seismology. Seismology is based on the transmission of sound waves by the rocks of the crust. Strong earthquakes create pressure waves (natural sources of seismic waves) that are transmitted through the entire Earth and detected by seismographs (receivers) on the other side. Seismic exploration, however, as employed by the petroleum geologist, makes use of artiﬁcially generated pulses (seismic sources). The principle is simple; an impulse source sends acoustic energy into the Earth. This energy propagates in many directions and is reﬂected and refracted when it encounters boundaries between two layers. Sensors (seismic receivers) placed on the surface measure the reﬂected or refracted acoustic energy. These artiﬁcial sources are much weaker than the natural seismic source (earthquake) but are more focused towards areas of speciﬁc stratigraphic interest. 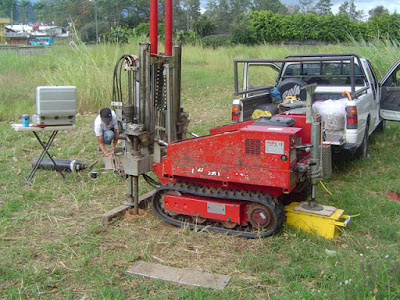 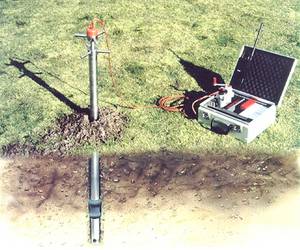 Seismic Receivers
Hydrophones and geophones serve as receivers for seismic signals. The hydrophone is a device designed for use in detecting seismic energy in the form of pressure changes in water during marine seismic acquisition. It measures pressure variations with the aid of piezoelectric material, which generates a voltage upon deformation. The two piezoelectric elements in one hydrophone are connected and polarised so that voltages due to pressure waves (returning signal) add and voltages due to one-directional acceleration will cancel. In this way the inﬂuence of movements due to currents, wave action and so on will be minimised. Hydrophones are combined to form streamers that are towed by seismic vessels or deployed in a borehole. A typical length of a streamer is about 4-6 km where a single receiver section is typically 75 m long and contains 96 hydrophones which are grouped in arrays of a pre-deﬁned length, mostly 12.5 or 25 m. The geophone is a device used in surface seismic acquisition, both onshore and on the seabed offshore, that detects ground velocity produced by seismic waves and transforms the motion into electrical impulses. Geophones, unlike hydrophones, detect motion rather than pressure. Conventional seismic surveys on land use one geophone or a group of geophones per receiver location to detect motion in the vertical direction. The three-component (3C) geophone is used for direct measurements of shear waves at the seaﬂoor. An essential feature of a seaﬂoor seismic acquisition is the four-component (4C) detector unit, which includes a hydrophone and a three-component (3C) geophone. The hydrophone and the vertical geophone measure pressure waves, whereas the two extra horizontal geophones measure particle velocity associated with shear wave energy.

Seismic aquisition
The seismic survey is an essential part of the whole cycle of petroleum exploration and production. Seismic surveys are carried out on land and in transition zone, shallow marine and marine environments in different ways. The basic principle is an impulse source such as dynamite, air-gun or vibrator that sends acoustic energy into the Earth. This energy propagates in many directions. Downward travelling energy reﬂects and refracts when it encounters boundaries between two layers with different acoustic properties. Sensors or geophones placed on the surface measure the reﬂected acoustic energy, converting it into an electrical signal that is displayed as a seismic trace. The typical recorded seismic frequencies are in the range of 5–100 Hz. P-waves are the waves generally studied in conventional seismic data. P-waves incident on an interface at other than normal incidence angle can produce reﬂected and transmitted S-waves. S-waves travel through the Earth at about half the speed of P-waves and respond differently to ﬂuid-ﬁlled rocks, and so can provide different additional information about lithology and ﬂuid content of hydrocarbon-bearing reservoirs. The recorded seismic trace is a convolution (∗) of the source signal and the reﬂectivity sequence of the Earth plus noise. A seismic trace can simply be expressed by the equation below where multiples are not considered. Transmission losses and geometric spreading are not included and the frequency dependent absorptions are also ignored in the equation.
S = W ∗ R + Noises
where S is the recorded seismic trace, R is the reﬂectivity and W is the wavelet. A wavelet is a kind of mathematical function used to divide a given function into different frequency components and study each component with a resolution that matches its scale. Accurate wavelet estimation is absolutely critical to the success of any seismic inversion. The inferred shape of the seismic wavelet may strongly inﬂuence the seismic inversion results and therefore subsequent assessments of the reservoir quality. Attenuation (amplitude loss) of seismic waves is an important phenomenon and caused by three major factors:
Newer Post
Older Post
Home