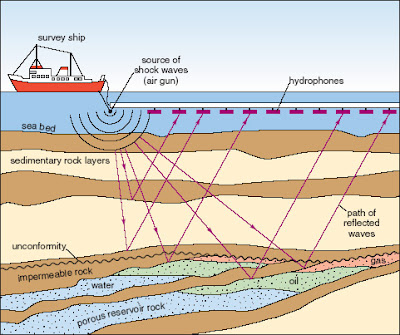 Marine aquisition
Marine seismic acquisition is generally accomplished using large ships with one or multiple air-gun arrays for sources. Air-guns are deployed behind the seismic vessel and generate a seismic signal by forcing highly pressurised air into the water at a given interval. Receivers are towed behind the ship in one or several long streamer(s) that are several kilometres long. Marine receivers are composed of piezoelectric hydrophones, which respond to changes in water pressure. In marine acquisition, seismic vessels sail along predetermined patterns of parallel circuits. The length of straight segments is calculated from fold plots, and must include additional length run in and run out to allow the cable to straighten after each turn. Marine seismic acquisition is faster than conventional land seismic because it does not require jug hustlers to lay and pick up geophones. The advance to 3D seismic acquisition and imaging of the subsurface, introduced in the 1980s, was perhaps the most important step in seismic exploration. The 3D seismic images began to resolve the detailed subsurface structural and stratigraphic conditions that were missing or not discernable from 2D seismic data. With 3D seismic acquisition potential reservoirs are imaged in three dimensions, which allows seismic interpreters to view the data in cross-sections along 360◦ of azimuth, in depth slices parallel to the ground surface, and along planes that cut arbitrarily through the data volume. Information such as faulting and fracturing, bedding plane direction, the presence of pore ﬂuids, complex geological structure, and detailed stratigraphy are now commonly interpreted from 3D seismic data sets. In 2D marine data acquisition a single streamer is deployed, whereas in 3D acquisition multiple streamers are towed behind the boat. 3D acquired data can be processed in a more consistent manner and be further manipulated using modern visualisation tools. In 2D data acquisition the data collection occurs along a line of receivers. The resultant image represents only a section below the line. Unfortunately, this method does not always produce a clear subsurface image. 2D data can often be distorted with diffractions and events produced from ofﬂine geologic structures, making accurate interpretation difﬁcult. Because seismic waves travel along expanding wavefronts they have a surface area. A truly representative image of the subsurface is only obtained when the entire waveﬁeld is sampled. A 3D seismic survey where the vessel is towing many streamers (up to 20) at the same time with multiple arrays of airguns is more capable of accurately imaging reﬂected waves because it utilises multiple points of observations. In the case of 3D survey we have seen that seismic data are sampled from a range of different angles (azimuth) and source-receiver distances (offsets). After seismic processing the data can then be represented as 3D volume images of the subsurface. In 2D processing, traces are collected into CMP gathers, while in 3D, traces are collected into common-cell gathers (binning). To perform 3D binning, a grid is ﬁrst superimposed on the survey area. This grid consists of cells with dimensions of half the receiver group spacing in the in line direction, equivalent to the CMP spacing in 2D processing, and the line spacing in the cross line direction. In reality, midpoint distributions within a cell are not necessarily uniform since cable shape varies from shot to shot and line to line. Such side drift of the cables is called feathering. Another advanced technique of marine seismic is ocean bottom seismic (OBS) acquisition. It gives the possibility of direct measurement of S-wave data in addition to P-wave data by using ocean bottom cables that have three component geophones (3C) and a hydrophone in addition (thus 4C in total). The 4C cable can be up to 6 km long with 240 stations (i.e. 960 channels since 4C). A typical OBS layout involves 4 or more cables. The optimal choice of acquisition geometry for a 4C survey hinges on both geophysical and ﬁnancial considerations. Most designs can be classiﬁed as either patch or swath. In swath designs, the source lines are parallel to receiver lines, while in patch designs, source lines are perpendicular to receiver lines. Patch design produces seismic data of a relatively wide range of azimuths, whereas the swath design produces data of a limited or narrow range. Moreover, the swath design offers a more uniform sampling of offsets with better near-offset coverage. The use of 4C OBS recording has several advantages over conventional towed streamer technology, which includes:
A comparison of the migrated P–S stack versus the P–P stack. The P–S stack is produced from OBS converted wave data whereas the P–P stack is produced from 3D towed streamer P-wave data. From this comparison it is clear that OBS data can be used to successfully image through a gas chimney. 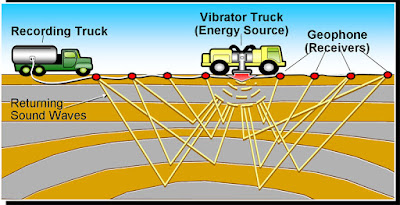 Land aquisition
A complication in land acquisition is that, unlike marine data, a seismic line is rarely shot in a straight line because of the presence of natural and man made obstructions such as lakes, buildings and roads. The shot points and the receivers may be arranged in many ways. Many groups of geophones are commonly used on a line with shot points at the end or in the middle of the receiver array. The shot points are gradually moved along a line of geophones. The variations in ground elevation in land acquisition causes sound waves to reach the recording geophones with different travel time. The Earth’s nearsurface layer may also vary greatly in composition, from soft alluvial sediments to hard rocks. This means that the velocity of sound waves transmitted through this surface layer may be highly variable. Static corrections a bulk time shift applied to a seismic trace are typically used in seismic processing to compensate for these differences in elevations of sources and receivers and near-surface velocity variations.
Newer Post
Older Post
Home