There is a wide range of instruments, geophysical logging tools, that are lowered down a borehole to record the physical and chemical properties of the rocks. These instruments are mounted on a device called a sonde that is lowered down the drill hole (on a wireline) once the drill string has been removed. Data from these instruments are recorded at the surface as the sonde passes up through the formations. An alternative technique is to fix a sonde mounted with logging instruments behind the drill bit and record data as drilling proceeds. The tools can be broadly divided into those that are concerned with the petrophysics of the formations, that is, the physical properties of the rocks and the fluids that they contain, and geological tools that provide sedimentological information. The interpretation of all the data is usually referred to as formation evaluation – the determination of the nature and properties of formations in the subsurface. Many of these tools are now used in combinations and provide an integrated output that indicates parameters such as sand:mud ratio, porosity, permeability and hydrocarbon saturation.
Petrophysical logging tools 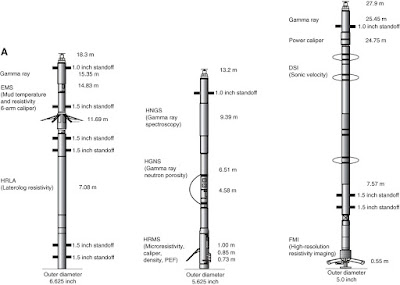