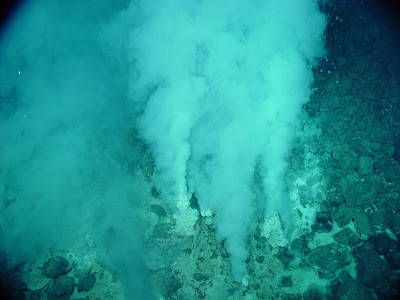 Across the redox boundary there is a high gradient in the concentration of oxygen and sulphate, and of ions that have very different solubilities in oxygenated and reduced water. The redox boundary is usually just 1–20 cm below the sea-ﬂoor and represents equilibrium between the supply of oxygen by diffusion, and its consumption by the (mostly biological) oxidation of organic matter. The oxygen content in the pore water thus decreases rapidly below the water/sediment interface, providing a concentration gradient for the downward diffusion of oxygen into the uppermost sediments. The rate of downward diffusion of oxygen is a function of the concentration gradient of oxygen in the pore water and the diffusion coefﬁcient in the sediments. The diffusion coefﬁcient in coarse-grained sand is higher than in mud and therefore sand tends to have a deeper redox boundary than mud. Oxygen can also be consumed in the sediments by the oxidation of elements like iron and manganese in minerals, but this is rare in marine environments and more common in continental deposits. In most marine environments there is enough organic matter to serve as reducing agents and therefore little oxidation of iron in minerals takes place, which explains why marine sediments do not normally acquire are colour. A notable exception is red oxidised mud which may form in marine environments characterised by slow sedimentation rates and low organic productivity. These muds are not very common but occur in some deep-water facies and also in shallower water environments with low sedimentation rates. Uranium is highly soluble in seawater as uranyl (UO2+) and precipitates as reduced uranium oxide (UO2) on organic matter in the water column and below the redox boundary. There is thus a strong concentration gradient transporting uranium from the seawater down into the sediments. The adsorption of uranium onto organic matter settling on the sea-ﬂoor coupled with restricted ventilation of the water above the sediment at the time of deposition, makes source rocks like the Kimme ridge shale strongly enriched in uranium, causing peaks on the gamma ray well log curve. Iron and manganese may be transported upwards through the sediments in the reduced state by diffusion and then precipitate on the sea-ﬂoor as oxides because of their reduced solubility in the oxidised state. Iron may also be precipitated below the redox boundary as iron sulphides or iron carbonate (siderite), though iron carbonates will not form during sulphate reduction. This is because all the iron will be precipitated as sulphide, which has a much lower solubility than siderite. Manganese is not precipitated as sulphides because of the high solubility of Mn-sulphides, but may be precipitated as Mn-carbonate in the reduced zone. At a depth where there is practically no more free dissolved oxygen in the pore water, sulphates can be used by sulphate-reducing bacteria. The reduction of sulphates produces sulphides such as pyrite.
The composition of clastic sediments is modiﬁed by the addition of new components produced locally within the basin:
Newer Post
Older Post
Home