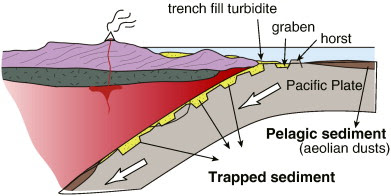 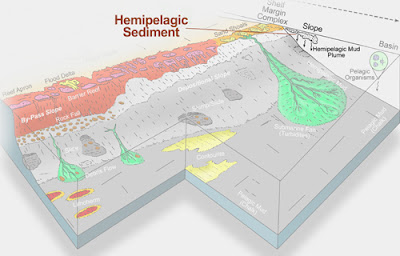 Fine-grained sediment in the ocean water that has been directly derived from a nearby continent is referred to as hemipelagic. It consists of at least 25% non-biogenic material. Hemipelagic deposits are classified as calcareous if more than 30% of the material is carbonate, terrigenous if more than half is detritus weathered from the land and there is less than 30% carbonate, or volcanigenic if more than half is of volcanic origin, with less than 30% of the material carbonate. Most of the material is brought into the oceans by currents from the adjacent landmass and is deposited at much higher rates than pelagic deposits (between 10 and over 100mm/yr ). Storm events may cause a lot of shelf sediment to be reworked and redistributed by both geostrophic currents and sediment gravity underflows. A lot of hemipelagic material is also associated with turbidity currents: mixing of the density current with the ocean water results in the temporary suspension of fine material and this remains in suspension for long after the turbidite has been deposited. The provenance and hence the general composition of the hemipelagic deposit will be the same as that of the turbidite. Consolidated hemipelagic sediments are mudrocks that may be shaly and can have a varying proportion of fine silt along with dominantly clay-sized material. The provenance of the material forms a basis for distinguishing hemipelagic and pelagic deposits: the former will be compositionally similar to other material derived from the adjacent continent, whereas pelagic sediments will have a different composition. Clay mineral and geochemical analyses can be used to establish the composition in these cases. Mudrocks interbedded with turbidites are commonly of hemipelagic origin, representing a long period of settling from suspension after the short event of deposition directly from the turbidity current.
Chemogenic sediments
A variety of minerals precipitate directly on the sea floor. These chemogenic oceanic deposits include zeolites (silicates), sulphates, sulphides and metal oxides. The oxides are mainly of iron and manganese, and manganese nodules can be common amongst deep-sea deposits. The manganese ions are derived from hydrothermal sources or the weathering of continental rocks, including volcanic material, and become concentrated into nodules a few millimetres to 10 or 20 cm across by chemical and biochemical reactions that involve bacteria. This process is believed to be very slow, and manganese nodules may grow at a rate of only a millimetre every million years. They occur in modern sediments and in sedimentary rocks as rounded, hard, black nodules. At volcanic vents on the sea floor, especially in the region of ocean spreading centres, there are specialised microenvironments where chemical and biological activity result in distinctive deposits. The volcanic activity is responsible for hydrothermal deposits precipitated from water heated by the magmas close to the surface. Seawater circulates through the upper layers of the crust and at elevated temperatures it dissolves ions from the igneous rocks. Upon reaching the sea floor, the water cools and precipitates minerals to form deposits localised around the hydrothermal vents: these are black smokers rich in iron sulphide and white smokers composed of silicates of calcium and barium that form chimneys above the vent several metres high. The communities of organism that live around the vents are unusual and highly specialised: they include bacteria, tubeworms, giant clams and blind shrimps. Ancient examples of mid-ocean hydrothermal deposits have been found in ophiolite suites but fossil fauna are sparse.
Newer Post
Older Post
Home