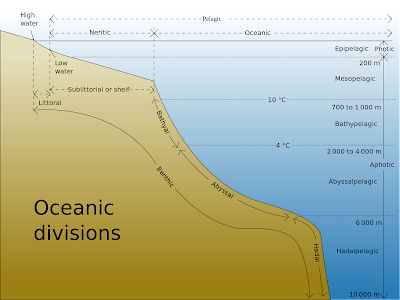 Altogether 71% of the area of the globe is occupied by ocean basins that have formed by sea-floor spreading and are floored by basaltic oceanic crust. The midocean ridge spreading centres are typically at 2000 to 2500 m depth in the oceans. Along them the crust is actively forming by the injection of basic magmas from below to form dykes as the molten rock solidifies and the extrusion of basaltic lava at the surface in the form of pillows. This igneous activity within the crust makes it relatively hot. As further injection occurs and new crust is formed, previously formed material gradually moves away from the spreading centre and as it does so it cools, contracts and the density increases. The older, denser oceanic crust sinks relative to the younger, hotter crust at the spreading centre and a profile of increasing water depth away from the mid-ocean ridge results down to around 4000 to 5000 m where the crust is more than a few tens of millions of years old. The ocean basins are bordered by continental margins that are important areas of terrigenous clastic and carbonate deposition. Sediment supplied to the ocean basins may be reworked from the shallow marine shelf areas, or is supplied directly from river and delta systems and bypasses the shelf. There is also intrabasinal material available in ocean basins, comprising mainly the hard part of plants and animals that live in the open oceans, and airborne dust that is blown into the oceans. These sources of sediment all contribute to oceanic deposits. The large clastic depositional systems are mainly found near the margins of the ocean basin, although large systems may extend a thousand kilometres or more out onto the basin plain, and the ocean basin plains provide the largest depositional environments on Earth. The problem with these deep-water depositional systems, however, is the difficulty of observing and measuring processes and products in the present day. The deep seas are profoundly inaccessible places. Our knowledge is largely limited to evidence from remote sensing: detailed bathymetric surveys, side-scan sonar images of the sea floor and seismic reflection surveys of the sediments. There are also extremely localised samples from boreholes, shallow cores and dredge samples. Our database of the modern ocean floors is comparable to that of the surface of the Moon and understanding the sea floor is rather like trying to interpret all processes on land from satellite images and a limited number of hand specimens of rocks collected over a large area. However, our knowledge of deep-water systems is rapidly growing, partly through technical advances, but also because hydrocarbon exploration has been gradually moving into deeper water and looking for reserves in deep-water deposits.
Morphology of ocean basins