The Place to Be

Throughout my life I have either attended, or worked in, a public school, as had my parents.  In terms of my own education, I always felt that I was provided with the knowledge and skills to succeed in life.  By no means was my pubic schooling perfect and when I look back there were many instances that presented opportunities for improvement.  The bottom line, however, was that I had passionate and caring educators who pushed me to be the best student that I could be regardless of the deficiencies inherent in an industrialized model of education.

As fate would have it my role changed and I began to have a direct impact in the position of either a teacher or administrator. Throughout my ongoing career as an educator in public schools, I have always worked to provide a relevant, meaningful, and applicable learning experience for my students.  I have written extensively about many of the successful initiatives that were implemented over the course of my career at New Milford High School.  Even with these successes, many of which have been widely publicized, we were never perfect when it came to meeting the needs of all learners. This was also the case when I recollect my days as a science teacher and coach at Watchung Hills Regional High School.  Mistakes were constantly made and some persistent issues were never changed no matter how hard we tried.  Through it all there was more positive than negative in each experience and this has only strengthened by resolve for, and support of, public schools.

When it came time to make a decision about where to send our two young children to school there really was no decision to be made. Even though I was intimidated by the outright size of the New York City School system I was fully committed to sending my children to public school in my home borough of Staten Island.  We were fortunate to move from our first home on the island to an area called Pleasant Plains and were ecstatic to find out that we were zoned for Public School 3. The word on the street was that this was a very good school, but it wasn’t until I met Principal Judy Wilson that I realized how special the school really was. I still remember the day when I sent my son Nick in with a copy of the Scholastic Administrator magazine where I was featured on the cover. Once Judy realized that I was Nick’s father we began to immediately have conversations on how to improve the school culture at PS 3. 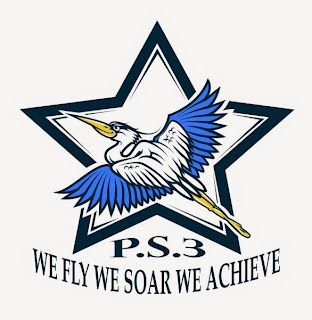 Judy Wilson is such a passionate principal who works tirelessly to create a school that fosters a love for learning.  At times the cards are stacked against her because of the levels of bureaucracy, mandates, and senseless policies that are embedded elements of the NYCDOE.  In the face of these challenges and many others, she has worked collaboratively with passionate staff members to provide authentic learning experiences for the students there.  For example, a dance studio was created in an unused space and dance has now become integrated across the curriculum.  The dancing classroom program was brought to PS 3 five years ago for every 5th grade student.  The program builds social awareness, confidence and self-esteem in students through the practice of social dance. They cultivate a new competition team every year composed of 12 students who compete citywide. Every year the team has brought home gold medals.

Last year Judy brought VR Quest to the school where students, including my son, were able to create their own 3D virtual reality games from scratch after school.  Thanks to the incredible guidance of Media Specialist James Laieta, my son was part of his S.W.A.T. Team where students worked collaboratively after school to work on their games.  James volunteered to do this, as he is a true educator who believes in allowing students to follow their creative passions. Another highlight at PS 3 includes an annual field trip on board a floating lab. Then there are more personal situations that mean more than words can describe. When Judy Wilson found out that my son was becoming disinterested in school she went out of her way to have him do the morning announcements with older students.  This not only made him a bit more eager to go to school, but also has had a positive impact on his communication skills.  These are just a few examples of how the school is working to better meet the diverse needs of my children.

All in all I am happy with my children’s school, but just like in my experiences, there have been a few issues that have clouded my judgment as of late.  These issues relate to homework and Common Core implementation.  Without going into much detail these isolated issues have morphed into a message that my kids hate school.  I even went as far to state this emphatically in my recent TEDx talk.  The honest truth is that my kids are, well, kids and as such they typically don’t like some aspects of their formal education.  I know I didn’t.

In retrospect, going forward I need to focus more on collaborating with the staff at PS 3 to improve some of the elements that my children don’t like instead of rattling off sound bites.  Today I sat down with my kids and had a detailed conversation with them about all the many elements of PS 3 that they love. Let me tell you, there were many!  Judy possesses an undeniable focus to move the school forward and actually implement ideas and suggestions I put forth.  I should not use my influence to paint an inaccurate picture of a school version of David going up against Goliath, which is the NYCDOE.  As the motto states, PS 3 is “The Place to Be.” I am a firm believer in this and now have to act like it. Instead of focusing on the negatives, which are inherent in any school system, I will work to promote what makes PS3 special while providing constructive feedback and hands-on support as needed.
Newer Post
Older Post
Home