Consequences and Causes of Metamorphism

What Is a Metamorphic Rock? 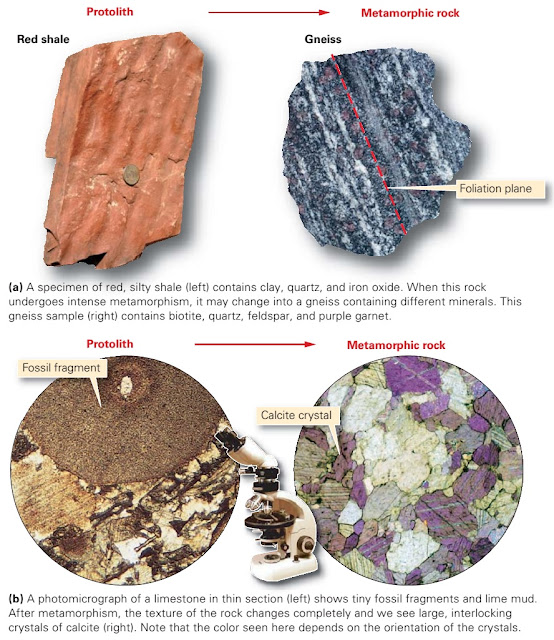 Metamorphism Due to Heating

When you heat cake batter, the batter transforms into a new material cake. Similarly, when you heat a rock, its ingredients transform into a new material metamorphic rock. Why? Think about what happens to atoms in a mineral grain as the grain warms. Heat causes the atoms to vibrate rapidly, stretching and bending chemical bonds that lock atoms to their neighbours. If bonds stretch too far and break, atoms detach from their original neighbours, move slightly, and form new bonds with other atoms. Repetition of this process leads to rearrangement of atoms within grains, or to migration of atoms into and out of grains, a process called solid-state diffusion. As a consequence, recrystallization and/or neo-crystallization take place, enabling a metamorphic mineral  assemblage to grow in solid rock. Metamorphism takes place at temperatures between those at which diagenesis occurs and those that cause melting. Roughly speaking, this means that most metamorphic rocks you ﬁnd in outcrops on continents formed at temperatures of between 250C and 850C.

Metamorphism Due to Pressure

As you swim underwater in a swimming pool, water squeezes against you equally from all sides in other words, your body feels pressure. Pressure can cause a material to collapse inward. For example, if you pull an air-ﬁlled balloon down to a depth of 10 m in a lake, the balloon becomes signiﬁcantly smaller. Pressure can have the same effect on minerals. Near the Earth’s surface, minerals with relatively open crystal structures can be stable. However, if you subject these minerals to extreme pressure, the atoms pack more closely together and denser minerals tend to form. Such transformations involve phase changes and/or neo-crystallization.

Changing Both Pressure and Temperature 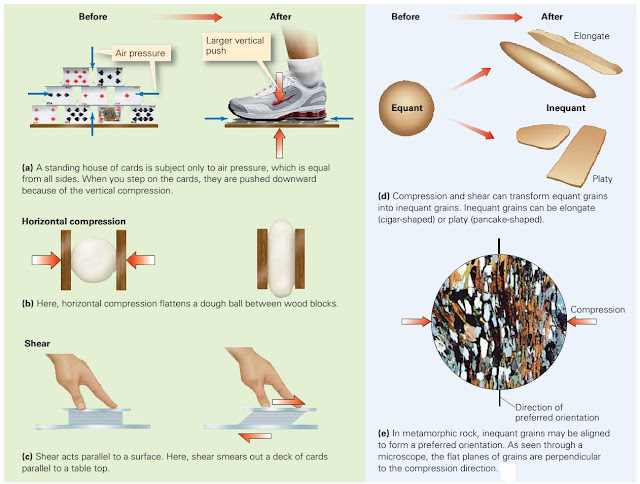 Imagine that you have just built a house of cards and, being in a destructive mood, you step on it. The structure collapses because the downward push you apply with your foot exceeds the push provided by air in other directions. We can say that we have subjected the cards to compression (a in figure above). Compression ﬂattens a material (b in figure above). Shear, in contrast, moves one part of a material sideways, relative to another. If, for example, you place a deck of cards on a table, then set your hand on top of the deck and move your hand parallel to the table, you shear the deck (c in figure above). When rocks are subjected to compression and shear at elevated temperatures and pressures, they can change shape without breaking. As it changes shape, the internal texture of a rock also changes. For example, platy (pancake-shaped) grains become parallel to one another, and elongate (cigar shaped) grains align in the same direction. Both platy and elongate grains are inequant grains, meaning that the dimension of a grain is not the same in all directions; in contrast, equant grains have roughly the same dimensions in all directions (d in figure above). The alignment of inequant minerals in a rock results in a preferred orientation (e in figure above).

The Role of Hydrothermal Fluids